Is she really that Different? 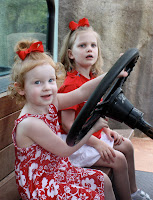 Without a doubt, the question most people ask me when checking in on Avery's progress is whether or not she is talking yet. I would say that it happens about once a week or so. It doesn't bother me, in fact, it usually gives me the opportunity to share a little bit about how Autism effects Avery specifically, and about how we have learned to let go of unreasonable expectations.

Long before I had a daughter with Autism, most of you know that I was already in the "business." I had completed graduate school and worked with countless families and children on the autism spectrum. Whenever I run into an old family that I haven't seen in a while and share Avery's story, they usually leave open-mouthed, astounded at the irony of it all. Believe me, I am equally astounded, and I have been dealing with this for over two years now!

Anyway, the knowledge I have about Autism and child development in general isn't always the blessing you might imagine. I can tell you that Avery is a LONG way from talking, because in order to verbally communicate, dozens of developmental foundations have to be in place first, and for Avery, we are still working very hard at those foundations that Autism has taken from her. She had them at one time, and one by one after she was about 14 months old, she lost them. She has yet to regain most of the relationship, social, and communication skills she had as an 11 month old. Sure, she has made some progress in other areas, but this is a marathon not a sprint, and if I know anything at all, I know that we will be fighting for her to come back to us for a very long time to come.

Another unknown to many about Autism is that as a brain disorder, it CAN (and does in Avery) impair MANY functions of the body and immune system. Most of the research you read now points to Autism being a systemic disorder, and I can assure you this is true for Avery. Nothing she does is "normal." From eating, to walking, to responding to any sensory stimuli, to comprehending, to awareness of herself and others... she in incredibly impaired. Even how she responds to illness, pain, and how she sleeps... it is all VERY different from a neurotypical child. She needs medication to sleep, can slam her fingers in the door and/fall flat on her face with only a whimper... she would wander off in a heartbeat if we let go of her hand, and she has no awareness of how her actions might impact another person. Autism, especially when paired with her autoimmune disorder, (and having mastocytosis made her 10 times more likely to have Autism according to new research) makes fighting illness incredibly difficult, and having seizures during her lifetime probable. The whole package can be mind boggling and completely overwhelming. I know more now about the body, immune system, mitochondria, and so on than I EVER imagined I would.

Another question posed to me all the time is whether or not I believe vaccines had anything to do with Avery developing Autism. This is such a touchy subject. I usually skirt around my answer, and say something about how I believe vaccines are safe for 99% of the population, but that for a kid like Avery, whose immune system was already compromised, that fighting the live viruses and preservatives present in a vaccine was very hard on her body and brain. She would ALWAYS run a high fever for days after a vaccine, and her body would ALWAYS be covered in hives. Not to mention that by the time she was 1, she had been on 17 rounds of antibiotics for constant ear infections and strep throat. So my answer is that I don't know. I DO know that most kids do fine with vaccines, but that for my kid, it could have been a part of her downfall. I think the jury is still out for kids like Avery who start out with a crummy immune system. I will tell you that Kaylin has yet to have the first shot, and when we do start them this fall, she will only get one at a time and only a select few. She is 100% healthy. I absolutely believe that vaccines are not a one size fits all kind of treatment. Just as some kids can't have penicillin (like Avery for instance) some kids are GOING to react to a shot... it says so when you sign the waiver. The risks are right there. Just weigh your family history and tread carefully.

So there it is, no, Avery is not talking, and yes, I think vaccines (the huge number at such a delicate developmental point in life) may contribute to Autism in some way. I also think just as some of us are genetically prone to develop diabetes, some of our kids are genetically susceptible to developing Autism... and some environmental insult, be it a vaccine, a virus, an environmental toxin or whatever can push them right over the edge... shutting down a protein necessary for brain function or whatever. But I DO NOT believe that Avery was "born" with Autism. I wish you could have known her as a baby. I have awesome video that I RARELY watch of her meeting all of her milestones and connecting to others beautifully. When she began to drift away a part of me went with her. And I can also tell you with certainty that it is NOT something you just "get over." As our children age and their peers blow by them and continue to thrive, the wound keeps re-opening, and sometimes the pain and sadness seep in again.

It does "get better." Not necessarily the "autism" but the way we cope anyway. New challenges ALWAYS present themselves in everyday life, but we move forward. We learn how to manage and remember that as parents, our love is absolutely unconditional.

Everyday I am BLOWN AWAY as I watch my 2 year old daughter develop normally. She talks in LONG sentences, can tell me about her feelings and her pretend play. She stays with me physically and mentally, she took all of one weekend to potty train, she runs and jumps and protests and manipulates. And thankfully, she evens me out from the overwhelming grief I was enduring before her presence. Sure, she is hard in her own ways, but not emotionally. It is my hope that her strong will will continue to lead her in the right direction, and one day help Avery. She too loves her sister, despite her sister's inability to reciprocate. I hope that she too will learn the magic of unconditional love and the importance of tolerance and support.

Avery is THAT different. She is also a beautiful and amazing little girl who has touched countless hearts. She is so much more than her disabilities. She is pure love.
Posted by Jenny Beeson at 10:00 AM 3 comments:

Jenny Beeson
Frisco, Texas, United States
My most important life roles at the moment are to be the wife of Bryan Beeson and mother of Avery Grace, Kaylin Joy, Presley Hope and Paxton Graham. Paxton is two with many medical complications resulting from a fluke mutation on his 2nd chromosome causing Tatton-Brown Rahman Syndrome, and Avery is 10 and has Autism/ Rett Syndrome/ and now Phelan McDermid Syndrome diagnoses. I am a developmental specialist and behavior analyst trained in many different techniques of child development (can you imagine the irony) and have been working with children on the autism spectrum for 16 years. Now personally impacted, I want more than ever to find answers, see change and somehow discover peace and magic in the wonders of disability.

A little about Mastocytosis . . .

Mastocytosis is a group of rare disorders of both children and adults caused by the presence of too many mast cells (mastocytes) and CD34+ mast cell precursors in a person's body. It can affect just the skin or it can also affect internal organs such as the stomach, lungs, and intestines.

Patients with Mastocytosis may feel better when taking reflux meds and antihistamines. Proton pump inhibitors help reduce production of gastric acid, which is often increased in patients with mastocytosis.